The Samsung Galaxy Note has been Samsung’s top tier phone and the biggest competitor to Apple’s iPhone plus series. Their Galaxy Note has always been an expensive phone, but not as expensive as the highest-end iPhone this time around.  The Note series was the first line to push the boundaries on large screen devices which has become quite popular.  As someone with average sized hands, I will say it is very easy to get use to a larger sized device and I don’t plan on ever downsizing again.  This product line is known for having high-end hardware available and sporting a feature filled S-Pen.  The latest model in this series, the Galaxy Note 10, was released on August 7, 2019 with an initial price for $949. 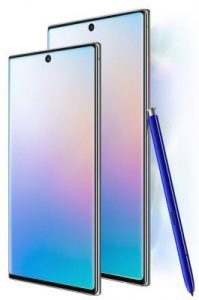 There’s no question that the Samsung Galaxy Note 10 is the best Android phone right now and a worthy competitor to the iPhone. It has everything you’d expect from a super phone – great display, excellent performance, very good battery life, and interesting new features such as smart cameras, Bluetooth-connected S Pen and more. Recommended for those willing to dish out the money for the best Android has to offer!  Well worth the upgrade for anyone with a Note 5 or earlier.