If you’ve ever seen a camera attached to a bike or helmet, do you immediately think it’s a GoPro? Chances are that it is. When the GoPro Hero came out in 2004, it changed the way we think of the mobile action camera because expensive rigs used for filming POV video could now be done with a small camera the size of a computer mouse at a fraction of the cost. The GoPro Max is a 360-degree camera that intends to improve upon the mistakes made with the GoPro Fusion. The latest model of GoPro Max was released on October 24, 2019 for an initial price of $499. 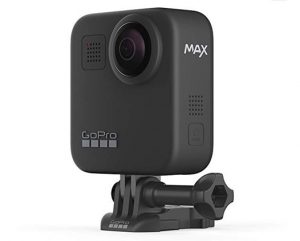 The GoPro Max is GoPro’s second attempt at a 360-degree camera after the GoPro Fusion. The Fusion version was bigger, needed two microSD cards, and it took forever to stitch together everything on a separate app. The GoPro Max is a 360-degree camera that intends to improve upon the mistakes made with the GoPro Fusion – smaller and lighter, in-camera stitching, rugged, has an improved mobile app, and a longer lasting battery.